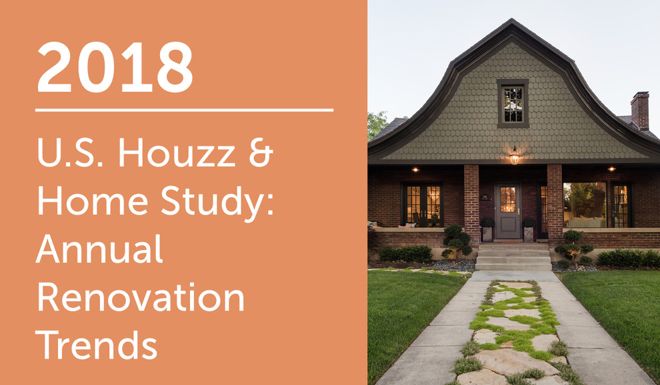 Home Renovation Boom Continues: Half of homeowners on Houzz plan to begin or continue renovations in 2018 (51%), with a median planned spend of $10,000. Renovation activity and spend were strong in 2017, extending the boom of 2015 and 2016, with 58% of homeowners renovating their homes, at a median spend of $15,000. While homeowners who have lived in their current homes for six or more years drive the majority of renovations, activity among recent homebuyers is growing.

Kitchens and Bathrooms Lead Activities and Spend: The median spend on kitchen remodels increased 10% year over year in 2017, while master bathrooms overtook living/family rooms as the third-most-popular room to renovate, after kitchens and guest/other bathrooms. Four in five renovating homeowners report that kitchen and master bathroom upgrades increased the value of their homes (83% and 81%, respectively), far more than any other renovation project (48% to 76%).

Planning is More Deliberate: Homeowners have become more deliberate in planning for renovations, as reflected in budgeting, project and hiring trends. For example, homeowners were 12% more likely to set a budget in 2017 (77%) than in 2015 (69%). Similarly, homeowners are increasingly more likely to tackle multiple preventative projects at a time, such as home systems and exterior features upgrades, and to hire specialists to complete them.

Renovation Spend Jumps in Houston and Los Angeles: Reflecting the impact of the 2017 Atlantic hurricane season, median spend on renovations in the Houston metro area increased 60% year over year, making it the fourth-highest spend among U.S. metros ($24,000). The Los Angeles metro area, tying for the second-highest spend at $25,000, saw the second-largest spending increase (25%), likely in part a reflection of the damage caused by wildfires. Renovations triggered by natural disasters increased to 6% in 2017 from 4% in 2016.